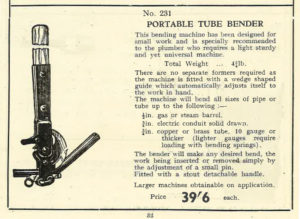 The 15mm 22mm pipe bender or tube bender is an essential part of the toolkit for any heating or plumbing engineer.

It is well documented that soldered fittings and compression fittings interrupt the flow of water around a heating system. Bending of copper pipe ensures unrestricted flow of water and can also create attractive, crafted finishes on installations.

The Pipe Bender has been sold by Monument since the 1930s from the combination 15mm & 22mm version (Monument code 2600K) right up to large stand benders. The Monument® and Shetack® branded catalogue from June 1933 clearly shows a version of a portable pipe bender / tube bender being sold over 85 years ago. 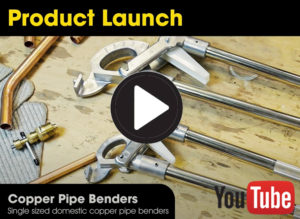 When Monument look to design, manufacture and market a new product we look to create products which will save the engineer time. In this particular instance, we have designed a smaller and lighter weight pipe bender than the standard combination 15and 22mm hand bender.

Monument have reengineered a design previously unseen on the UK market. The (launched in June 2020) pipe benders,  1215K XV 15mm Pipe Bender, the 1315XVE 15mm (1315Longarm XVL 15mm), the 1222G XXII 22mm and the 1322Extended XXIIE 22mm Pipe Benders deliver force to bend the pipe in the same plane as the bend. The traditional combi bender such as the Hilmor ® GLM or Irwin ® GLM or Monument ® MON2600 are offset from the bending plane.

The single sizes of each bender with their shorter bending arms and lightweight aluminium die casting makes each bender lighter to carry and the design of the 15mm-XV is small enough to fit inside a toolbag.

We have included bending angles of 30 45 60 and 90 degrees on the XV and XVL 15mm versions and an additional 75 degree angle on the 22mm version; these are easily visible on the Former of each bender.

The standard finish of the benders is a bright zinc plate on the Arms with rumbled aluminium Former and Lever castings. We will also be making available special editions with different finishes to the castings. Some of the Monument Masters have received laser etched and polished castings which look fantastic!

Differences compared to a combi bender

The Monument Masters 1215K-XV, 1315-XVE, 1315Longarm-XVL, 1222G-XXII and 1322Extended-XXIIE create similar bend radiuses to a Monument 2600K combi bender; in fact the 1222G has a slightly tighter radius that the 2600K combi bender, as this radius is tighter it creates a slightly different profile on the outside of the bend when compared to a combi.
We believe the 1215K-XV, the 1315XVE, the 1315Longarm-XVL, the 1222G-XXII and the 1322Extended-XXIIE are easier to use than a combi bender: 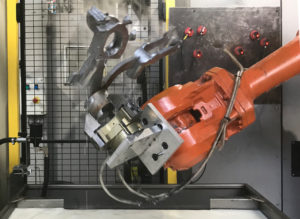 The Monument Masters 1215K, 1315XVE (replacing the 1315Longarm), 1222G and the 1322Extended Pipe Bender are #MadeInBritain. First models of the new pipe bender were designed and 3D printed in the engineering suite at Monument. We standardised the handle diameters for both sizes.

Included in the box are the instructions for use. The pipe bender is simple to use: 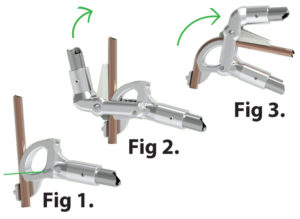 1. Mark the pipe where you want start of the bend. Position the pipe in the Former under the Retaining Hook. Position the start of bend vertically in line with the Pivot Pin.

3. Close the Arms of the benders and continue until the required bend angle is achieved, rotate the lever back to the start angle to release the two Arms.
Before you remove the pipe from the Former, view your bend angle; remove the pipe if it is correct, or if necessary, reapply the Lever Arm and increase the bend angle. 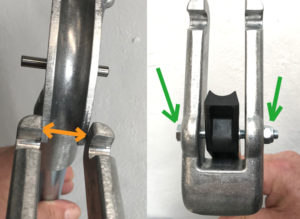 What are the Black Caps for?
These protect the pin during transit and should be removed before use.

Why don’t the Castings seem to fit together ?
On a few benders we seem to have overtigtened the nyloc nut and bolt which has reduced the gap on the Lever Arm. Simply back off the nut 1/2 to 1 turn and the bender should be good to go. We tried to make it a snug fit but seems it has oversnugged. See image with orange and green arrows.

From your experience, why does copper pipe ripple when you bend it?
We posed this question through the Tooltalk App (see all the answers in the app available for iOS or Android AOS).
Some of the answer’s are below………

A. If your pipe is thin walled and your equipment is not clean (Answered by Colin Stainer Plumbing & Heating on 27 Jan 2021)

A. Couple of reasons guides and formers not clean and greases or cheap thin wall imported copper. Don’t get this problem very much now since ordering my monument benders. (Answered by A Daughtry Plumbing & Heating Ltd on 26 Jan 2021)

A. Pipe wall size is a lot thinner than it used to be, plus the pipe bender former could be stiff (Answered by D S plumbing and heating on 26 Jan 2021)

A. Cheap thin wall copper doesn’t help the issue, there was a batch a few years ago that was actually snapping. Damaged formers or the guide on bender itself can also do it. Or guides, formers that are not clean (Answered by PG Plumbing on 26 Jan 2021)

A. Over the years been a few reasons, main reason I find or is poor quality copper! Other reason dirt on the guides generally a good clean and oil or dw40 sorts it out, had once with bender that had been dropped and it was slightly twisted (Answered by B H heating solutions on 26 Jan 2021) 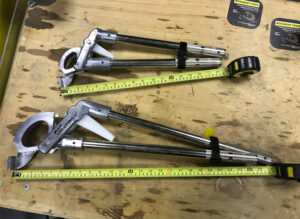 A. Cheap thin copper but even expensive copper ripples. But makes a big difference with running wire wool over the guides first.  Keep them clean. Found the wee monument benders don’t ripple the pipe as much. Great wee benders (Answered by Roy Millar Plumbing and Heating on 26 Jan 2021) 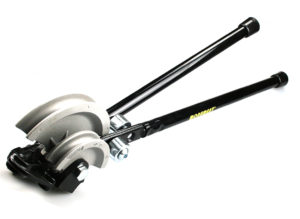 The Monument 2600K 15mm and 22mm is a best selling pipe bender. These are available in Monument brand widely available across the UK from plumbers merchants and e-tailers  MON2600 2600K,  Instinct® brand INST2600 from PHG independent plumbers merchants and also from UKPS plumbers merchants including Plumbase under Entity® brand ENT2600. When initially launched on the UK market Monument ensured that the hook stop was redesigned so as to not mark the pipe.
The 2600K includes 15mm and 22mm aluminium guides. These guides are available as spares;15mm 2601N and 22mm 2603T. These guides also fit Irwin® and Hilmor® GLM.

See the other pipe bending products including bending springs.